Most new developers/users of python want to jumpstart and code their desired functionality. Many do not take time to understand how python packages are installed/updated on their system. But, if one really wants to stay away from python package installation troubles and want to distribute their modules to the world reliably, one should consider going through the basics of python package management.

Well, having said that, i must admit that python package management is slightly complex as there are a number of tools/utilities that are in use currently depending on the python version/platform you are using.

Python user base can be broadly categorized as:

How does python distribution look like when installed on the filesystem?

How can I install new python packages on my machine?

How difficult is it to install/use a python module?

What constitutes a package?

A python package consists of the following elements:

What should a package management system accomplish?

For any Package management system the primary goals are:

Above goals pose a tough challenge for any package management system.

Python modules can be of following types:

Packaging, building and distributing a pure python code is not so difficult as the code can be compiled and run on any platform which provides a python Virtual Machine implementation. But, the process is not so simple when we need to do the same for python extensions.

For instance, if i were to write a python extension in C, i have following options: 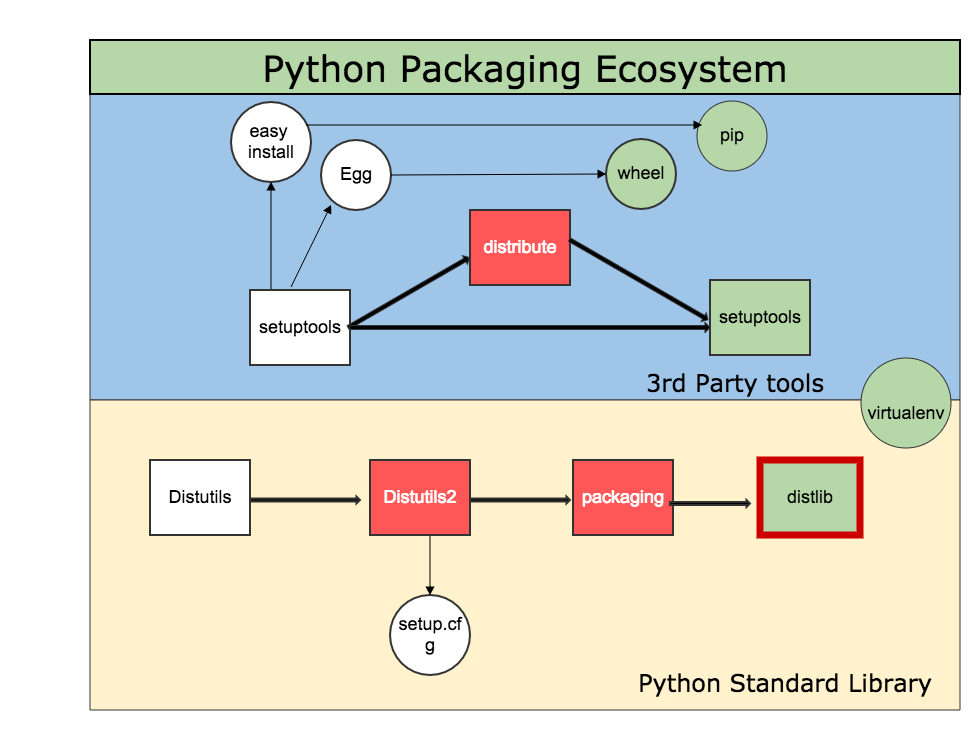 Currently, as a developer you must use one of the following two options to package your modules:

How to publish your package

Python defines 2 standard container formats which allow to pack metadata along with your modules:

Existence of so many different utilities to manage python packages has been a source of confusion for everyone. Considering the features of tools available today, it would be a safe bet to use setuptools or distutils for doing all the packaging stuff. For installation/uninstallation using different sources of python packages or the cheeseshop a.k.a PyPI, it is recommended that you use pip.

Although you are free to choose the distribution format as per your requirement, but use of wheels format is recommended if it suits your deployment requirements.

setup.py still remains our gateway for packaging of python modules. setup.cfg introduced in distutils2 is a great way of decoupling metadata from the setup python script. But, it is still undergoing improvement as the standard evolves.